How to Avoid a Cross-Country Moving Scam 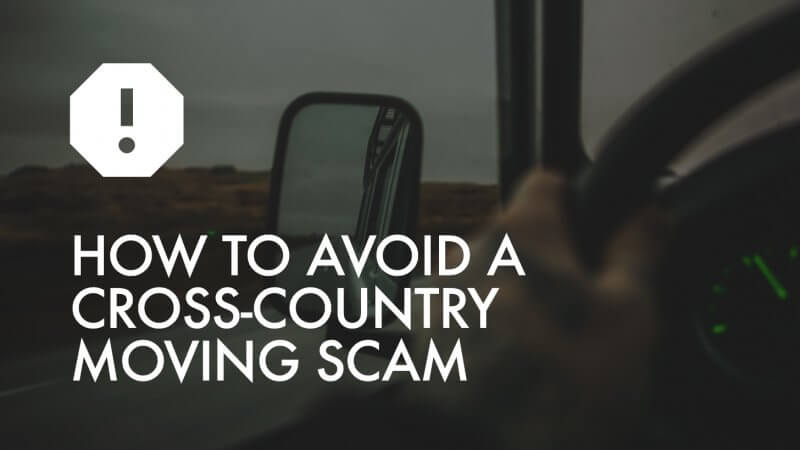 If you are getting ready to tackle a cross-country move, you will probably want to hire a moving company. Unfortunately, unscrupulous businesspeople do exist, and the moving industry is no exception. The Better Business Bureau reports that it receives thousands of complaints about movers annually, which range from overcharges to missing or damaged goods. Move Rescue, a consumer assistance service, reports that there are up to 3,000 cases of interstate mover fraud each year. You will need to be careful to choose a reputable moving company to avoid scams.

Dishonest moving companies engage in a variety of scams that end up hurting unsuspecting customers. There are two primary scams perpetrated by unscrupulous movers:

1. Offer a low estimate and then charge much more later.

After you have already received and agreed to your estimate, a dishonest moving company may add additional, unjustifiable charges. In this scam, movers give you an estimate that contains one low price to sucker you in, but when it comes time to move, they replace this estimate with a “final cost” that far exceeds the one to which you initially agreed.

For example, the company may lead you to believe packing is included in your total charge, and then later charge you extra when your goods are not fully packed.

Another example of lowballing is when a moving company claims it is charging by the weight when you get your estimate, but then later claims it must charge by square footage only after the movers load the truck. Allied Van Lines calls this type of scam “the bait and switch.”

In other instances, moving companies may not add those extra charges on until it is time to unload your goods. Allied Van Lines calls this “the hostage” scam, because the movers will not release your goods until you agree to pay the revised, higher price. If you find yourself a victim of the “hostage” scam, and a moving company refuses to release your belongings to you, you can contact a consumer assistance service such as Move Rescue for help.

2. Promise timely delivery, but then deliver late or not at all.

In another deceptive practice, a moving company may lure you in with a promise of a delivery that meets your schedule, and then, at the last minute, tell you that your belongings will be late. One common excuse for this is that your goods are “toward the back of the truck,” and so they must make another delivery before they can get to them.

Even worse, some rogue moving companies will pack up all your goods, take your money for the move, and then never bother to deliver at all. Instead, they will simply abandon the moving truck at a storage facility, shut down their company, and vanish. You will consequently be forced to pay to get your goods out of storage, if you can even find out where they are. Other rouge movers may even go so far as to steal and sell your belongings. In that case, you need to file a police report.

The Federal Motor Carrier Safety Administration (FMCSA) and the Better Business Bureau (BBB) have identified numerous “red flags” that should give any potential customer pause. When it comes time to hire a moving company for your cross-country move, be sure to look for these warning signs, which might indicate that you are about to get ripped off:

What to Look for When Hiring a Moving Company

Now that you know what to avoid, it is important to consider the qualities you should seek out in a moving company. Keep these things in mind:

An A+ BBB Rating

A reputable moving company should have a good rating with the Better Business Bureau.

Your movers should provide you with a copy of “Your Rights and Responsibilities When You Move” and “The Ready to Move Brochure.” Federal regulations require that moving companies supply these two publications to customers making cross-country moves. If your moving company does not give you these documents, that may be a sign that the movers don’t want you to know your rights.

A trustworthy moving company will be willing to furnish you, upon request, a copy of an Annual Performance Report, which should tell you how many claims have been filed against the company for damaged goods, lost goods, late deliveries, and poorly estimated final costs.

A good mover will provide you with a written estimate of charges.

Before settling on a moving company, consider asking for references. Moving.com suggests you ask for three references from your area who have used the company’s service within the last three months.

Make sure you get everything in writing from your moving company of choice and check the inventory list. If an item is not on the inventory, it will be hard for you to claim it as missing if it is not delivered.

If, despite your best efforts, you fall prey to fraud, you can file a complaint online with the Federal Motor Carrier Safety Administration.

When hiring a mover through the Kip’s Cross Country Movers platform, you can rest assured that we’ve already done the legwork to help you avoid a moving scam. Our network of moving companies is licensed and insured, so you can have peace of mind hiring one of our recommendations. Get started with a free quote from one or more vetted long-distance movers!